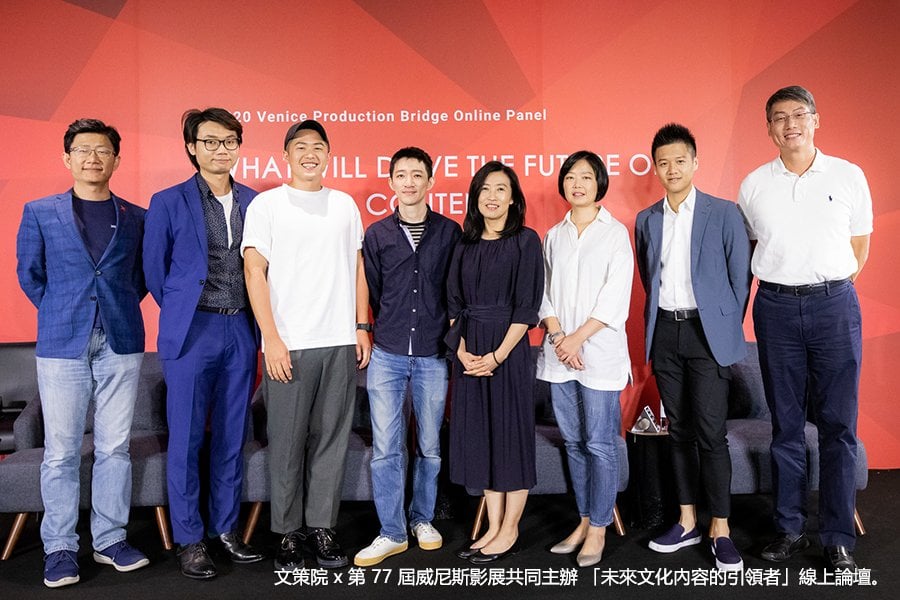 Taiwan has shown outstanding developments in AVMR content and is widely recognized by international film festivals alike such as Cannes and Venice Film Festivals. Recognizing Taiwan’s achievement, the 77th Venice International Film Festival has featured creators from Taiwan and the Taiwan Creative Content Agency (TAICCA) in a Venice Production Bridge (VPB) online panel titled, “What Will Drive the Future of Cultural Content?” on Sep. 7, 2020. Moderated by TAICCA’s president, Lolita Ching-Fang HU, expert panelists are invited to talk about their respective experiences around three topics: The Power of Content Creation, The Power of Content and Technology, and The Power of Industry Ecosystem.

The first part of the panel, “The Power of Content Creation,” invited three Taiwanese directors shortlisted for the 2020 Venice VR categories, including John HSU for Great Hoax: The Moon Landing (星際大騙局之登月計畫) in Competition, Chih-Yen HSU for Jiou Jia “Home” (舊家) in Best of VR – Out of Competition, and Chi-Chung TANG for The Sick Rose (病玫瑰) in Venice Gap - Financing Market. The Venice International Film Festival VR Programmer, Liz ROSENTHAL, also joined remotely to offer professional perspectives on how the Venice VR selection represents the best of what is possible to this new format.

Rosenthal stated that from the moving, beautifully shot Jiou Jia “Home,” to the comedic and interactive single-player experience of Great Hoax, and the completely different stop-motion animation genre of The Sick Rose, were “a great representation of the breadth of work from Taiwan.”

Rosenthal emphasized the multidisciplinary nature of VR projects that require creators who understand the dynamics of physical space and real-time performance, adding that “it's the first time I've seen the need for so many creative sectors to work together, and I think that's what makes VR such an exciting media.”

In terms of VR content creation, Great Hoax: The Moon Landing director John HSU explained that “there are stories that can only be told through an interactive experience,” making VR a flexible medium for him as a filmmaker. Director Chih-Yen HSU of Jiou Jia “Home” expressed that he wanted to focus on capturing the movement of the family in one-shot, which required concentration from the whole crew at the same time. As for director TANG of The Sick Rose, he thinks that with VR, “the screen is getting closer and closer but offers a bigger perspective, and that allows a lot of possibilities for us to explore.”

The second part of the panel, “The Power of Content and Technology,” Technical Director Shou-Jung PENG of Industrial Technology Research Institute (ITRI) acknowledged that creators and technologists speak different languages. PENG added that the creative process requires translation between technical and creative aspects to enhance games, music videos, or films projects with engineering.

Joining in via video conference call, Taiwan AI Labs founder Ethan TU elaborated that “AI still has to learn from someone, and human’s need for content will drive the technology” and future content creators can think outside the box to consider the tools available to realize their creative vision.

Lucid Realities CEO Chloé JARRY also pointed out that even though the communication between the technical and creative sides are challenging, the results will lead artists to reimagine new ways of content creation.

For the third part of the panel, “The Power of Industry Ecosystem,” experts exchanged views on how 5G connectivity enables content industries, influences distribution and business models, and challenges creators in the market.

As one of the most prominent 5G telecom distributors in Taiwan, Taiwan Mobile Deputy Director Peggy SHAW introduced the multiple business models of myVideo as well as its content investment strategy to move up the ecosystem and discover more Taiwanese original productions. myVideo also partnered up with XRSPACE in August, which XRSPACE President Sting TAO added is an XR platform that brings people together in the virtual world.

When speaking on Taiwanese content and its position in the world, Digital Domain Content Director Jimmy CHENG believed that the best-selling point for Taiwanese creators is in our culture. “TAICCA and the Kaohsiung Film Archive have already been promoting VR content for years, so now producers in other countries all want to work with us. The content we have is very diversified and showcases Taiwanese culture that foreigners can understand,” said CHENG.

“TAICCA has been advocating the importance of culture-led technology integration,” TAICCA president HU stated, “As a technology island, Taiwan already has the foundation for a well-rounded VR ecosystem. We also have talented creators who know how to utilize technology. On top of all, our government has policies in place to support VR industry development. Last year’s Venice Film Festival came as a surprise with seven VR works selected, it was a true testament of Taiwan’s creativity, originality, and international co-production capability.”

TAICCA was also invited to participate in a roundtable hosted by the European Union and Directorate General for Communications Networks, Content and Technology on Sep. 4, titled “Building proximity through immersive content: a role for European creators and companies.” As the only non-European participant, TAICCA introduced the development and experiences of immersive content industry in Taiwan and its plans to shape Taiwan into a global innovation hub for immersive content.

Due to COVID-19, Venice International Film Festival extended its online presence including the Venice VR EXPANDED Satellite Network, which selected Taipei as one of its locations. In particular, the VPB has planned a series of online panels and 1-on-1 meetings to extend the Venice Film and VR Market virtually. The online panel is now available on Venice Film Festival’s official YouTube: https://www.youtube.com/watch?v=Ux-BaEH8wKw