TAICCA Announced Recipients of the “2020 Original Comics and Script Competition” 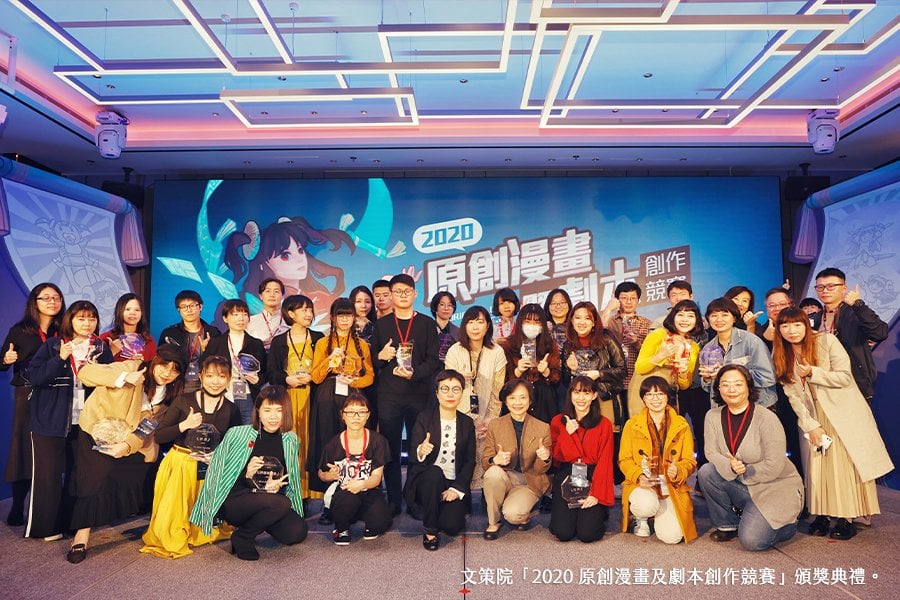 To discover more bright comic talents and original stories, as well as accelerate cross-medium collaboration, the Taiwan Creative Content Agency (TAICCA) set up the "2020 Original Comics and Script Competition" in July to encourage the development of the comic industry in Taiwan. Today on December 10th, TAICCA hosted the award ceremony for the competition to congratulate the winners of the 37 awards.

Within the 426 works submitted, the manga set in the Japanese-ruled Taiwan era, Nobu (信一), and the script inspired by Taiwanese folklore Love in Tavocan (tentative) (戀戀大目降), are the most recognized works, receiving the Gold Award and the Annual Theme Award respectively. Nobu also received the Reader's Choice Award, an honor well-deserved for the artist's originality and talent.

TAICCA Chairperson Hsiao-Ching TING, TAICCA President CF HU, Legislators Pin-Yu LAI, Chu-Yin LIN, and Chiao-Hui SU, who are all avid supporters of original content development, along with juries and experts of the comic, publishing, film and TV, and gaming industries attended the ceremony to present the awards.

TAICCA Chairperson TING stated in her opening remarks, “Over half of the 10 highest-grossing movies of all time are adapted from original comic IPs. Especially with the recent success of the Japanese animation Demon Slayer: Kimetsu No Yaiba (鬼滅之刃), we see the example of how Taiwan can create a flourishing content economy with comics - a mission that is important to the Ministry of Culture and TAICCA.”

“The Ministry of Culture provides a platform of this year’s successful published comics with the ‘Golden Comic Award’ (金漫獎), and supports the development of original comic with the ‘Comic Counselorships’ (漫畫輔導金).” TING added, “The Original Comics and Script Competition aims to promote unpublished works and to discover new talents and great content for the commercial market, locally and internationally. We have invited juries across industries to seek out these outstanding masterpieces (titles) and talents with the most market potential early-on. Along with TAICCA’s content development schemes, we hope to continuously promote Taiwan’s original content to every corner of the world.”

The competition is open to three comic-related formats, with a total of 426 works submitted, 145 were manga, 35 were webtoon, and 246 were comic scripts. Artists come from a diverse background, where over 60% of artists are women, and their subjects range from environmental issues, fantasy, thrillers, adventure, and multicultural ethnic groups. The competition also set the annual theme as historical fiction, which inspired many original works related to Taiwan's history.

The 53 shortlisted works of the three categories selected by ten juries were announced on November 11th to allow the general audience to vote for the Reader's Choice Award, and the results of which were announced on December 2nd.

The 2020 Original Comics and Script Competition garnered the support of the Ministry of Culture, providing a total sum of NTD 3 million (about one million USD) in prize money, the Gold, Silver, and Bronze prize winners each received NTD 300 thousand,  NTD 200 thousand, and NTD 100 thousand respectively. Besides the prize money, award winners will also have their works featured in CCC with TAICCA's assistance in further promotion and matchmaking globally.

The Gold Prize-winning work of the manga category, Nobu, is based on the Japanese ruled era in Taiwan. It depicted two brothers of Taiwan-Japanese descent who suffered as outsiders in both Taiwan and Japan. The brothers were then forced to return to Taiwan to stay with relatives after their parent's divorce. The delicate narrative and the artistic style conveyed the perspective and struggles of being mixed-raced during Japanese-occupied Taiwan.

The juries noted that Nobu has a mature artistic and storytelling style that is close to the professional industry-level - one that warranted three awards - including The Annual Theme Award and The Reader's Choice Award.

Nobu's artist, Ani YONG thanked her father for inspiring her and the opportunity to turn his memories into this work. She has already received offers from publishing houses and is looking forward to the release next year.

As for the Silver Prize winner of the manga category, The No-Laughing Content (tentative) (不笑之難), the plot centers on how a man with facial paralysis found his smile again by entering in a no-laughing contest. The Bronze Prize winner explores the question of life or death with organ transplantation in the troubled times of war in The Organ Harvester (臟移師).

The Gold Prize of the Scripts category Love in Tavocan (tentative) tells the love story between a spider spirit and a human based in Xinhua area of Tainan in the Qing Dynasty. The narrative cleverly integrates Taiwanese folklore with the earthquake that occurred at that time. The juries believe that the work has the potential to develop into a longer story, thus receiving the Gold Prize and The Annual Theme Award.

The writer of Love in Tavocan (tentative) Vincent WU is a graduate student in animation with a career goal in scriptwriting. He developed a fondness for the local area of Tainan throughout his eight years of school and tried to incorporate local myths into the script. WU said this was his first time writing in a more relaxed and humorous tone and was surprised and thankful to be awarded such recognition.

Two other outstanding scripts received Silver and Bronze Prizes were The Lost Item of Yellow (tentative) (Yellow 的遺物), a story about an AI robot taking revenge on humanity; and The Despair Enthusiast (tentative) (憂鬱狂熱者), which centers the topic of bullying.

Since TAICCA took over the operations in March and reopening the base in May, the TCB has hosted more than 30 activities, received over 140 matchmaking inquiries, and have successfully matched five projects, and helped develop seven works, welcoming over 200 creators, professionals, and comic-fans to participate.

After the online transition of the Creative Comic Collection, it has featured over a hundred Taiwanese original works with over 10 thousand viewership each day. The CCC has worked with over 77 creators and seven publishing houses and helped produced 65 original comics and 53 editorial articles. It also has a working partnership with Serendipity Films and the National Museum of Taiwan History. In only two years, the CCC has assisted 4 companies to publish 13 individual comic books.

TAICCA will continue to promote the development of comic talents to pave the way for Taiwanese comics into the international markets.