Taiwan’s VR films rank among the best in the world 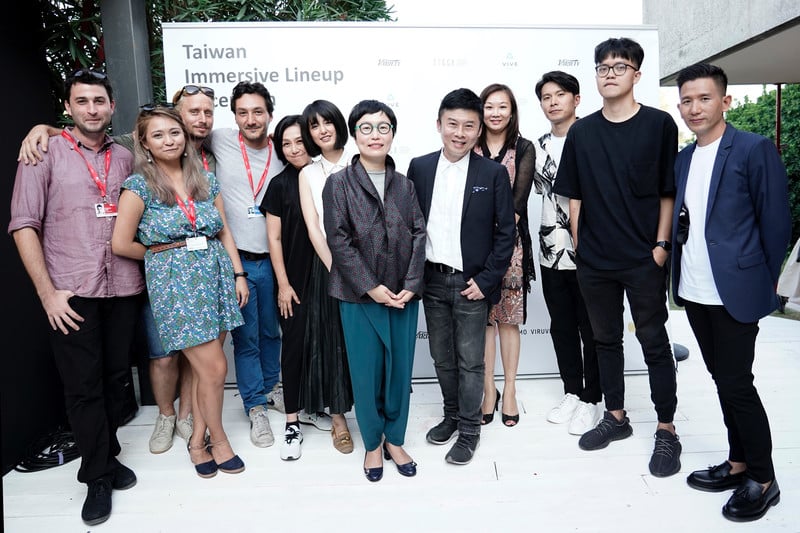 TAICCA has launched the first wave of its international co-production plan. Taiwan’s VR films rank third in the world and first in Asia at the 76th Venice International Film Festival.

The 76th Venice International Film Festival opened on August 28 with the awards to be announced soon. At the end of July, Taiwan officially unveiled its exceptional win in the VR section at the festival and ranked third among the lineup with a total of seven films out of the thirty-nine films selected in the VR section, including five selected for the competition and two for the out of competition category. Taiwanese VR films have witnessed increasing success at film festivals following the mixed media artist, Huang Hsin-Chien, won in the “Best Virtual Reality Experience” category at the Venice International Film Festival in 2017. In addition, this year, one film has been successfully included in the Venice Gap-Financing Market. Taiwan’s VR films have experienced growing recognition at film festivals around the world over the past three years. Owing to a unique combination of creativity and advanced technology, Taiwan has garnered a reputation as a world leader in the VR industry.

The Taiwan Creative Content Agency (TAICCA) attaches considerable value to the rapid development of Taiwan’s VR content. Just three months after TAICCA was established, Chairperson Ting Hsiao-Ching led her team to Venice to host the “Taiwan Immersive Lineup Party,” co-organised with HTC VIVE ORIGINALS (hereinafter “HTC”). Through this event, the recent developments of Taiwan’s VR industry were introduced to the audience and an international co-production plan was officially announced to attract, recruit, and mobilize talent and enterprises from around the world. The announcement of the co-production plan marked the first step that TAICCA takes to encourage and further international cooperation in the field of VR content.

Ting, TAICCA’s first chairperson, introduced the newly established organization to the guests at the beginning of the event. She listed the key factors that catapulted Taiwan’s VR content production, including one of the most open and liberal environments in Asia and a wealth of enthusiastic and imaginative contemporary artists and filmmakers who are keen on new media, new technologies, and inventing new forms of storytelling to interact with the audience. In addition, Taiwan has established its reputation as a leading global IT manufacturer and, in 2018, ranked among the top four innovative economies in the World Economic Forum Global Competitiveness Report. The cutting-edge technology plus innovative content production, with TAICCA’s support as the industrial accelerator, Taiwan will become the best partner of VR content creators and producers throughout the world.

The global VR industry is developing rapidly and, as such, is in desperate need of capital, technology and creativity. Success in this competitive industry requires advanced integration of software and hardware combined with focus on cultivating closer cooperation across borders. Through observing Taiwan’s finalists in this year’s Venice International Film Festival, three notable characteristics can be identified. Firstly, there are a large number of original, locally produced entries. Secondly, there are several examples of cross-genre works and international co-production entries, for example with the United States, Japan, France, and Argentina, thus showcasing the truly international outlook of Taiwan’s VR industry. Thirdly, government assistance has played an important role in the production process. Among the five VR works presented by HTC and selected for the VR category this year, three received grants from the Ministry of Culture (MOC) and were produced in cooperation with the Golden Horse Film Academy. Furthermore, the Ministry of Economic Affairs (MOEA) and the MOC respectively funded the Kaohsiung Film Archive to establish the first VR movie theatre in Asia, awarded grants to VR content development and production, and supported VR hackathon and the VR international forum at the Taipei Film Festival, all of which have shown that inter-departmental cooperation helped Taiwan gain a competitive edge in VR content production.

Another important element of government support has been the birth of TAICCA. TAICCA, by functioning as a professional intermediary organisation bridging civil society and the government, will further enable Taiwan’s cultural industry to become an important engine for growth within the country’s new cultural economy.

Expanding Taiwan’s cultural content industry to the global market is one of the key objectives of TAICCA. VR content has been identified as one of the key priorities within their strategy. In line with this strategy, Chairperson Ting officially announced that TAICCA is preparing to launch its first incentive programme for international VR content creators and producers at the Party, and she invited the guests to collaborate with Taiwan’s businesses and creators. Moreover, by managing and utilizing the National Development Fund, TAICCA will offer financial support for VR content industry through international collaborative venture. Ting also asked the guests to include Taiwan into their international co-production project, inviting them to enjoy the unique Taiwan experience when developing immersive content. Taiwan shall impress the creators and producers in the co-production project by providing brilliant sensory experience.

In the past few years, Taiwan’s VR new wave has captured a wave of global media attention at the Venice International Film Festival. TAICCA’s upcoming launch of the incentive programme at the Venice International Film Festival this year also attracted Variety, an internationally renowned film magazine, which has recently reported on TAICCA and the development of Taiwan’s VR industry in its special issue. Variety’s report not only described the establishment of TAICCA and its first incentive programme, but also interviewed French Office in Taipei and Kaohsiung Film Archive and concluded that from the producer’s perspective, international co-production that assembles and integrates professionals and resources will become the future mainstream business model.

Approximately a hundred professionals attended the Lineup Party. Representative Lee Sing-Ying, head of Taipei Representative Office in Italy, praised the new generation of filmmakers from Taiwan during his address. He acknowledged the brand new working methods creators have been experimenting to explore unknown territories in Taiwan’s film industry by creatively combining technology and cultural content. He then encouraged every exceptional artist to persist so as to usher in a new era of Taiwan cultural content.

Also at the Lineup Party were a number of creators, curators, film festival programmers, and distributors of international VR content production, including representatives from the Sundance Film Festival, the Cannes Film Festival, the Tribeca Film Festival, the Bucheon International Fantastic Film Festival, as well as producers like Atlas V and Digital Rise. Many of these guests have expressed considerable interest in the new co-production plan proposed by TAICCA and enthusiasm about Taiwan’s creativity and technological potentials, hoping to build connections with Taiwan. One of the VR section programmers this year, Michel Reilac, stated that they have watched quite a few Asian productions and selected full-fledged high-quality works from them, but they only noticed later that Taiwan’s production stood out and broke the record in terms of quality and quantity. The diversity of subject matters of Taiwan’s VR production also impressed Liz Rosenthal, the other programmer this year, who experienced the vibrant heart of Taiwanese culture. For the first time, TAICCA took the initiative to make Taiwan a key player in the industrial network of VR international co-production.

In terms of local production, international cooperation, software and hardware integration and government support, the highlights of the eight works selected for the upcoming competition and for the Venice Gap-Financing Market are as follows:

Through these examples, it is evident that Taiwan’s VR content productions have already demonstrated impressive progress in regard to technical capabilities, content creation and international cooperation. Furthermore, the commercial aspect of international VR production will be further enhanced through the integration of software and hardware.

To promote the application of cultural content and to facilitate the development of cultural and creative industries, the Ministry of Culture observed overseas models of professional intermediary institutions and prepared for the organisation of Taiwan Creative Content Agency (TAICCA). President Tsai Ing-wen promulgated the “Organisational Act of the Taiwan Creative Content Agency” in January 2019, and TAICCA officially starts operation after the list of its first Board of Directors and Supervisors were officially approved by the Executive Yuan in May 2019. The establishment of TAICCA marks the new milestone of Taiwan’s cultural economy.

TAICCA’s mission is to boost the development, production and international distribution of Taiwan’s cultural content, including film, television, popular music, graphic art publishing, digital publishing, animation, comics, and games (ACG), fashion, supports for art production, culture technology, etc. TAICCA combines the funding and creativity from the private sector and the systematic interdepartmental support from the government to build an ecosystem of Taiwanese cultural content industries. Meanwhile, TAICCA is authorized by the Ministry of Culture to manage and utilize the National Development Fund, aiming to gather and mobilize the momentum of investment in cultural content and startups for the purpose of shaping and branding Taiwan’s cultural content in the global market as well as improving the industries. TAICCA is dedicated to bringing the best features of Taiwan’s local culture onto the world stage, believing that Taiwan’s participation shall enrich and invigorate the international cultural landscape.