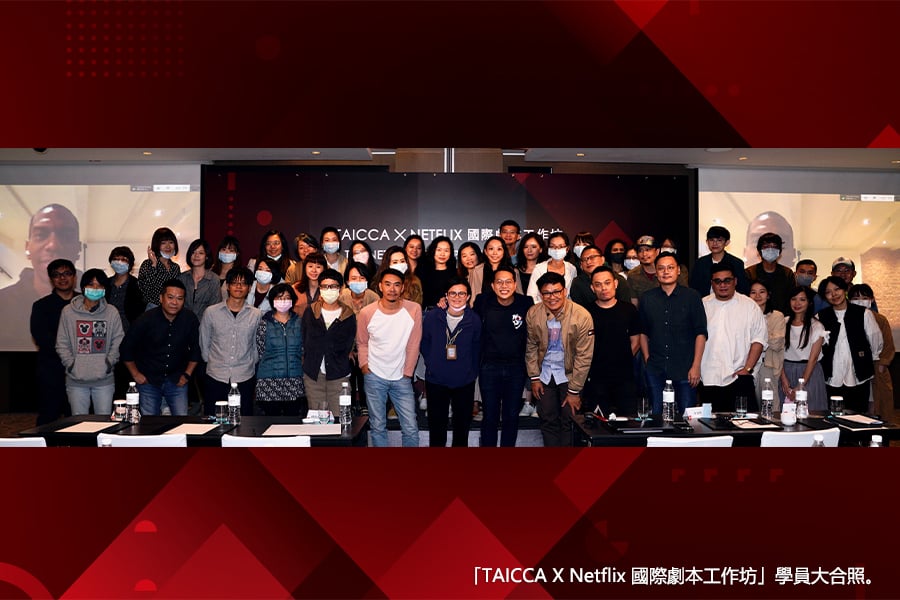 This partnership between TAICCA and Netflix is an important step in supporting original Taiwanese film and TV content on the global stage. Since its establishment, TAICCA is committed to enhancing cultural content ecosystems in Taiwan and promoting cultural products to international markets. As a global entertainment service, Netflix has been offering its members an increasing number of titles from Taiwan over the last few years.

"By working with Netflix,” said TAICCA President Ching-Fang HU in her opening remark, “we hope to expand Taiwanese original content into international markets, and to work alongside global industry ecosystems to provide outstanding content to audiences worldwide. The training workshop by TAICCA and Netflix will be followed by more mutually-beneficial programs, in hopes of more cooperation in audiovisual content.

"We have seen tremendous success in content coming from Taiwan, including our Netflix Original Golden Bell Award winners Nowhere Man (罪夢者) and The Victims' Game (誰是被害者). In this age of streaming, we are keen to leverage our global expertise to support writers in Taiwan and continue to unlock this incredible creativity and potential, by sharpening their skills in producing stories in formats that are done differently from before," said Jerry ZHANG, Manager of Content Acquisition at Netflix. "We just announced that we will be making The Victims' Game Season 2, and we look forward to working even more closely with the creative industry in Taiwan to produce more great stories that will be loved by Netflix members everywhere."

"Working with Netflix on The Victims' Game Season 1 was an eye-opening experience. It's a good reminder to all storytellers like us that we need to keep learning in order for Taiwanese content to maintain its competitive edge and global appeal," said Hank TSENG, founder and producer at Greener Grass Production. "It's very encouraging to see companies like Netflix recognize and invest in Taiwan's creative talent, and I'm confident that soon more stories from Taiwan will make breakthroughs and enter the world stage."

The workshop instructor, Christopher MACK, previously led Warner Bros. Workshop for ten years, the writing and directing program for professionals looking to start and/or further their careers in television. In that role, MACK curated a roster of close to 100 writers and 50 directors representing the breakthrough emerging voices working on high-profile television shows today. In today’s workshop, MACK taught participants to produce their best version of a character-driven series by asking the right questions and looking at their series using the character’s goals and motivations.

The workshop has been very well-received by the local industry since it was announced late last month,  TAICCA and Netflix will explore more sharing and training programs for film and TV professionals in Taiwan in the future. With talent development, industrial support, and financial assistance, TAICCA will also continue to cultivate Taiwanese content creators to launch into international markets.