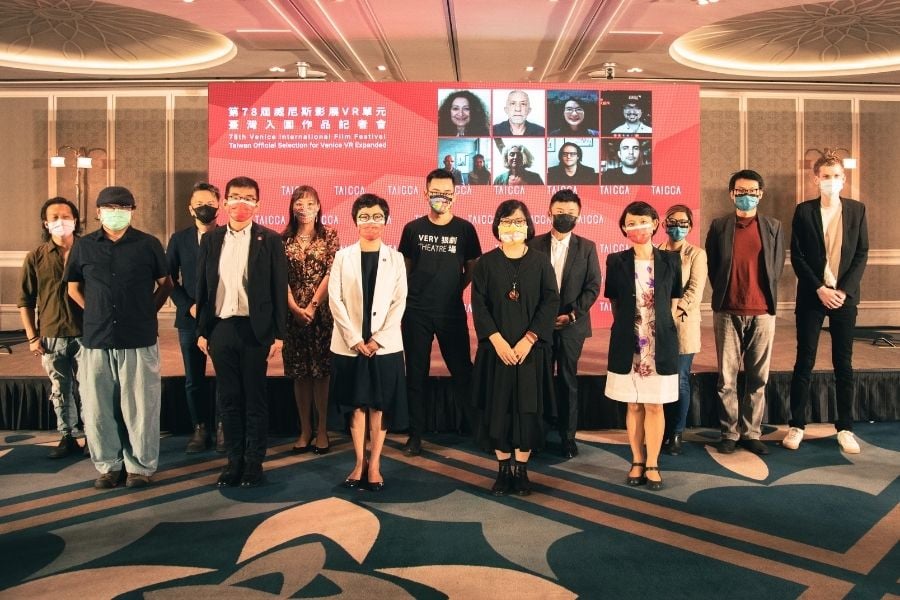 The 78th Venice International Film Festival announced the Venice VR Expanded nominees today. Taiwan has once again shown itself to be a top contender of VR content, with seven works nominated this year, five of which are selected for Competition, one for Best of VR - Out of Competition, and one for Special Project in the Official Selection-Out of Competition.

The five works shortlisted in the Competition, Sick Rose (病玫瑰), Samsara Ep.1 (輪迴), The Last Worker, The Starry Sand Beach, and Bedlam, are all supported by the Taiwan Creative Content Agency (TAICCA) and will compete for Grand Jury Prize for Best VR Work, Best VR Experience, and Best VR Story categories. Multiple Taiwanese works were selected in Venice VR Expanded in 2019. Since TAICCA launched the Immersive Content Grant, even more Taiwanese content has been entered into international VR competitions.

Venice VR Expanded Programmers also select two additional Taiwanese works from Kaohsiung VR FILM LAB, Speak to Awaken Ep.2 KUSUNDA (喚說其語 Ep.2 庫桑達)and In The Mist (霧中) into Best of VR Expanded - Out of Competition and Special Event - Out of Competition respectively. In the Mist director, CHOU Tung-Yen (周東彥), also participated in the 2021 TAIWAN x FRANCE XR Talents Networking Program. The selected works will be displayed online and physically screened in the Venice VR Gallery, as well as 14 satellite venues around the world.

“TAICCA’s efforts in encouraging international co-funding and co-production, promoting international exchanges of talents, and supporting content development with technology is now bearing fruit after two years,” said TING. “We will continue to cultivate global talents, consolidate resources worldwide to incubate more content, and promote Taiwan’s excellent creativity to the world to further push the boundaries of XR content and raise the global profile of Taiwan.”

In response, Meng-Yin YANG, Director of the Kaohsiung Film Archive, expressed gratitude to Funique VR Studio and all partners for their support. “Everyone is willing to invest in and to create new storytelling methods, and to promote their works to the international stage. With TAICCA’s resources and support, I believe that we can create a more diverse and complete environment for Taiwan's immersive experience industry,” adds YANG. She also announced that the full version of Samsara will premiere at the Kaohsiung Film Festival in October.

Venice VR Expanded Programmer Michel REILHAC pointed out that many of the selected works were international co-productions, sending a strong message that art is an international endeavor and a necessity nowadays. “No other country that manifests such a commitment in VR as Taiwan. We also want to commend the fact that there's an incredible diversity in styles and genres that have been produced for this year. We want to celebrate and tell you how thankful we are for providing such high-quality work,” said REILHAC.

ROSENTHAL shared that the works of this year’s Venice VR Expanded, including the outstanding works of Taiwan will be displayed through the online platform and 14 satellite programs.

In the Mist director, CHOU Tung-Yen (周東彥) shared that he was grateful for this island, the people, and the Taiwanese creators who had inspired him with their ground-breaking creativity and greatly influenced In the Mist.

Speak to Awaken Ep.2 KUSUNDA director Gayatri PARAMESWARAN empathized that co-productions were challenging but rewarding, allowing the teams to explore the knowledge and cultural identity represented by languages without boundaries or barriers. Co-producer LAI Kuan-Yuan (賴冠源) shared that the disappearance of languages was a global issue, and how technology allowed the Taiwan and German teams to co-create across borders.

Bedlam producer Antoine CARDON introduced that the work used technology to reproduce the 17th-century mental hospital, allowing the audience to experience “madness” through a metaverse and that Taiwan was the only place with the technological expertise to create an accessible social role-playing experience. Co-producer Stefano CENTINI, with extensive experience in international co-productions, regarded Taiwan as a prominent leader in the VR field.

As the only game selected this year, director Jörg Tittel of The Last Worker hoped for the audience to think about the deepest parts of humanity and the human experience through the game, and revealed that the game will be completed by the first quarter of next year. The Taiwan production team Pumpkin Studio marketing director, Huei CHAN (詹惠婷), thanked TAICCA for the opportunity to collaborate internationally, which made creating the game’s mesmerizing world possible.

The Sick Rose producer and also HTC VIVE President LIU Szu-Ming (劉思銘)mentioned that the cooperation with TAICCA involved many types of creation such as music and animation. The stop-motion film presented the aesthetics of Taiwan’s traditional craftsmanship combined with VR and demonstrated the convergence of the old and the new. Director HUANG Yun-Sian (黃勻弦), who came from a dough figurine artist family, emphasized that the combination of VR and stop-motion felt like an impossible task. However, the team delivered it as a gift to Taiwan and the world. As for director TANG Chi-Chung (唐治中), he compared filming a movie to dreaming, whereas filming in VR felt like he was in a dream.

Samsara director and new media artist HUANG Hsin-Chien (黃心健) thanked TAICCA and the Kaohsiung Film Archive for their support, and described “VR films are not only storytelling but ‘story living,’ as we live in the story.” The creative concept of Samsara is based on “time is an illusion,” and “incorporated many local components, such as Taiwanese musicians and an indigenous voice”. He hoped to bring Taiwan’s cultural elements to the world. Producer TSAU Saiau-Yue (曹筱玥) stated that Taiwan’s creative energy and technology were able to shine on the international stage with the support of TAICCA and the Kaohsiung VR Film Lab.