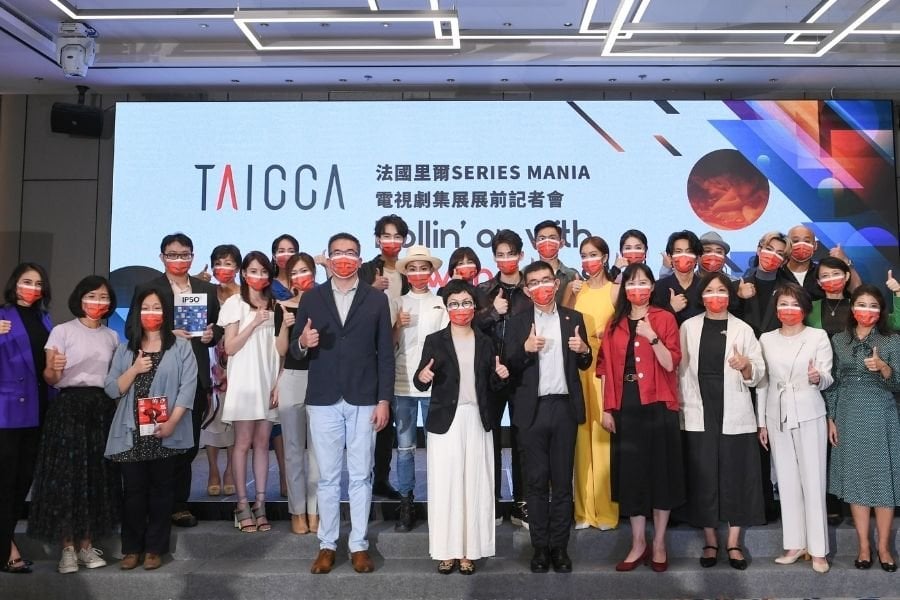 For the first time, Taiwanese TV series will be on the stage of Series Mania, one of Europe’s biggest and most prestigious TV series festivals based in Lille, France, from August 26th to September 2nd. The Taiwan Creative Content Agency (TAICCA) is leading the efforts to participate in Series Mania and will showcase 41 works from 23 production companies at the virtual Taiwan Pavilion, including multiple works selected into Competition and Forum Exclusives.

TAICCA hosted a press conference today (23rd) to kick off Taiwanese TV content’s journey to Lille. The press conference invited the actors, authors, and production teams of the selected works, including Fragrance of the First Flower (第一次遇見花香的那刻), selected for the Short Forms Competition. Who Killed the Good Man (大債時代) and The Amazing Grace of Σ (我願意) are selected for Forum Exclusives. Crime/mystery thriller novel, The Spectre in Samaji (沙瑪基的惡靈) by Taiwanese author Sha-Tang (沙棠), is also selected for Series Mania Book-to-Screen Forum.

Fragrance of the First Flower is shortlisted for the Short Forms Competition from 40 countries and 462 works. It also received the 2020 GagaOOLala Pitching Sessions Gold Award hosted by TAICCA and GagaOOLala last year.

Selected for Forum Exclusives include Who Killed the Good Man, which was officially announced at the 2020 Taiwan Creative Content Fest (TCCF) hosted by TAICCA. Also selected is The Amazing Grace of Σ, which caught the attention of Series Mania during the TAICCA and Golden Horse FPP Series at TCCF. These two works are amongst the 21 selected for Forum Exclusives and will be presented to more than 2,700 buyers worldwide boasting their opportunities for copyright sales.

In addition, international juries selected The Spectre in Samaji for this year’s Book-to-Screen Forum from a list of publications for film and TV adaptations submitted by TAICCA. The novel is also the only Chinese-language book among the 10 works officially recommended by Series Mania.

“The global pandemic accelerates the growth and demand of OTT platforms, which has brought opportunities for Taiwan’s content industry,” added TING, “To promote Taiwan as the best international co-production partner for European and Asian studios, TAICCA has established an official partnership with Series Mania. We encourage Taiwanese content to participate in forums and pitching sessions, and interact with international buyers. We hope to enhance Taiwanese content’s advantages in the international market during the Taiwan Creative Content Fest in November.”

General Director of Series Mania, Laurence HERZBERG stated in a pre-recorded video that Series Mania was delighted about partnering with TAICCA and Taiwan on a bigger scale. With international co-production as the main aspect of the TV series business, HERZBERG believed that many European and Western countries were looking for partners in Asia, and Taiwan’s great filming location, professionals, and quality of the industry allowed Taiwan to be the perfect co-production partner.

During the press conference, Heero Chiao (喬齊安), the chief editor of The Spectre in Samaji shared that for an original IP to be selected by an international festival was the greatest encouragement for editors, and looked forward to more adaptation of literary works into TV series in the future.

Cindy SHYU (徐秋華), president of Public Television Service which produced Who Killed the Good Man, thanked TAICCA for helping to launch the show internationally and believed that there would be more international co-production resources for Taiwanese works to be more competitive globally.

The director of The Amazing Grace of Σ, Lo-Ying WU (吳洛纓), also revealed that the first and second episodes would premiere at Series Mania, and looked forward to their entry into the European market.

The executive producer of Fragrance of First Flower, Jay LIN (林志杰), mentioned that the series was selected from 149 titles from 120 countries at the pitching session hosted by GagaOOLala and TAICCA at TCCF. The miniseries would also be available to stream on GagaOOLala at the end of this year.

TAICCA will curate the online Taiwan Pavilion "Rollin’ on with Taiwan Series” to promote local film and TV production companies and their content while strengthening Taiwan’s national cultural image through the richness and diversity of its original content. During the festival, TAICCA will also introduce Taiwan’s International Co-funding Program to attract more international buyers as well as co-production and co-funding opportunities.