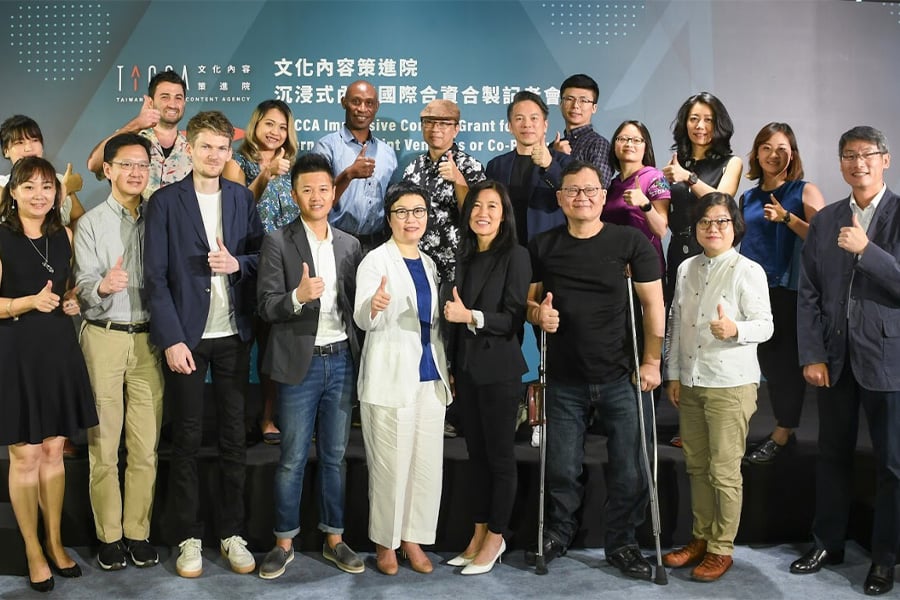 TAICCA not only takes the initiative to integrate the resources on the island but also helps the industry to prepare for international co-production. Within three months since TAICCA’s establishment, Chairperson Hsiao-Ching TING led TAICCA and Taiwan’s immersive content to the 2019 Venice Film Festival, where Taiwan was the year’s third most-nominated country in the VR section.

Taiwan also has other brilliant examples of government-supported projects in the VR domain, which include the Taipei Film Festival VR Hackathon, the first immersive VR theater in Asia, the Cultural Content and Technology Application Flagship Project, and a VR film partnership between the Golden Horse Film Academy and HTC.

Chairperson TING stated that “Through our projects, we can attract the best creative and technical talents across the world to develop the future content industry with Taiwan-based teams. I am glad that we can combine our strengths to achieve the next milestone together.”

To boost Taiwan’s visibility in the global content market, TAICCA supports cross-industry collaboration systemically and helps high-quality cultural content to combine with cutting-edge technology. TAICCA launched the first edition of the Immersive Content Grant for International Joint Ventures or Co-Productions in March 2020, welcoming international projects developed in cooperation with Taiwan or local productions that work with global talents. TAICCA invited ten experts in the XR and cultural arts field from France, the United States, the United Kingdom, and Taiwan to join the international jury panel. * (See below for full list)

A total of 34 projects were submitted, including teams from Taiwan, Japan, France, the United States, and the United Kingdom, and nine of which entered the second round. Through five hours of online deliberation, five finalists were selected for the immersive content grant. Two of which are from international teams, "Unannounced game" by Oiffy from the United Kingdom, and “The Starry Sand Beach” by Lucid Realities from France. The other three teams from Taiwan are “Anthem to the Fading Flowers (花神祭)” by [email protected] Lab Theater, “Missing Pictures (大師狂想曲)” by Serendipity Films Ltd., and “Through the Body (沉浸式投影創作暨技術提升計畫) ” by Virtual & Physical Media Integration Association of Taiwan. ** (For details of the projects, please see below.)

TAICCA President, Ching-Fang HU, who is also the chairperson of this year’s international jury panel, emphasized on the global prominence of Taiwan’s immersive content, which motivated TAICCA’s decision to launch the immersive content grant for co-production. “TAICCA and the juries will support the five selected teams through their production. Once completed, their works will enter TAICCA’s IP Showcase and recommended to the world,” added President HU.

Taiwan’s immersive content is one of the most influential players in the world, and the creativity of the submitted works often amaze TAICCA’s international juries. “I’m delighted to see many high-quality works from Taiwan and that Taiwan has reached such a professional level of content production,” said Cannes XR Day Program Leader, Elie Levasseur. “It’s inspiring to see all the excellent proposals,” said FuturePerfect Creative Studio CEO, Wayne Ashley. “I look forward to seeing the future development of these works.”

With this year’s Cannes Marché du Film moved online, TAICCA’s Cannes XR keynote, “How to Build an Ecosystem for XR? Taiwan as an Example”, will also meet the world in a virtual form on June 25. TAICCA has invited speakers from the industry, including Taiwanese XR content production teams with co-production experience, experts in content incubation, channel promotional, and technical services.