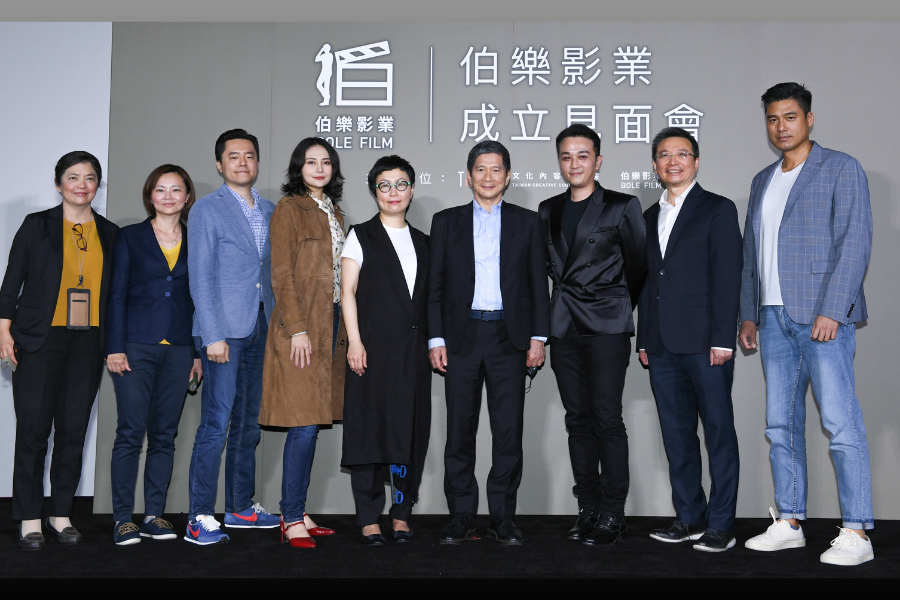 Since its establishment, TAICCA has been eager to integrate resources and finances of local film and TV industries, and strategically build alliances with the industry to promote and develop Taiwanese films. Through the co-investment of the third phase of the National Development Fund and the four major cinemas, Bole Films will target film IPs with Taiwanese elements and provide complete support from development, filming, distribution to marketing.

Bole Film also announced their upcoming seven film projects led by three renowned directors of various genres, including vigilante justice, suspense, crime, horror, action-comedy, and more. The diversity of genres and subject matters garnered the attention of Singapore’s mm2 Entertainment and will invest 10% in all of Bole’s current projects.

“One of the Ministry’s policies is to guide funding in the market to enter the film and TV industries.  We are pleased that TAICCA and the four major cinemas have come together for this joint-venture,” said Minister of Culture Lee Yung-Te. “The four major cinemas can provide direct feedback from the consumers and build a complete industry ecosystem from the production side to funding, and the market side. In the future, Taiwan will have a foothold in the international film area.”

TAICCA Chairperson TING said in her opening remarks, “TAICCA and four major cinemas co-invest in a company to introduce consumer insights from the early-stage of production. Introducing consumer preferences and embracing a marketing mindset during early-stage development is an important milestone for Taiwan’s film and TV industry.”

TING quoted from a line of a film that, “one person having a dream is just a dream, but when a group of people has the same dream, it becomes reality”. She also wished this alliance could identify hidden gems in film and TV industries, and inspire more creators and investors to work together.

TAICCA Chairperson Ting Hsiao-Ching said in her opening remarks that introducing consumer preferences and embracing a marketing mindset during early-stage development is an important milestone for Taiwan’s film and TV industry.”

TING also mentioned that under the support of the Ministry of Culture, TAICCA launched various programs to support the industry, such as the Youth Startup Loan Program and Credit Loan Program, for anyone in the cultural and creative industry with financial and investment needs. TAICCA also has a Creative Content Development Program (CCDP) and Taiwan’s International Co-funding Program (TICP) which provide a wide variety of funding and financing solutions, and TAICCA would work with the industry to turn visions into reality.

Bole Film Chairman WU stated that Bole would not only provide consumer insights for creative teams to produce films close to market preferences but also produce high-quality film and TV works. The dedicated management team would also reduce investment risks, increase profitability in Taiwanese films, and attract more investors to join in the ranks of investing in Taiwanese films.

Bole Film is a co-investment of the Good Hands Film (funded by VIESHOW Cinemas, Showtime Cinemas, Ambassador Theaters, and SKCINEMAS) with the third phase of the National Development Fund managed by TAICCA. Formally established in February this year, Bole Film consolidates the resources of Taiwan’s four major cinema chains and aims to become a complete film production platform with domestic and international distribution channels, introduction to strategic alliances and partners, and provide investments in the development, filming, and distribution of Taiwanese films.

The four major cinemas account for over 70% of the total Taiwan movie box office market. The goal is to utilize existing box office data to inform and develop films that meet market needs.

In terms of capital investments, Bole Films plans to provide up to NT$2 million incubation funds per film to initiate creative development. The revenue plan will also be completed in the early stage of production to help the creative team to adjust their direction with flexibility.

For medium-sized local films with a total budget of under NT$ 60 million, Bole will invest up to NT$ 10 million per film. The goal is to push out 3 to 5 Taiwanese films each year, to drive domestic and foreign capital to invest in the industrialization of the Taiwanese film and TV industry. Bole will also connect films to international OTT platforms and distribution channels, plan copyright pre-sale and distribution mechanisms, to increase the international visibility of Taiwanese films.