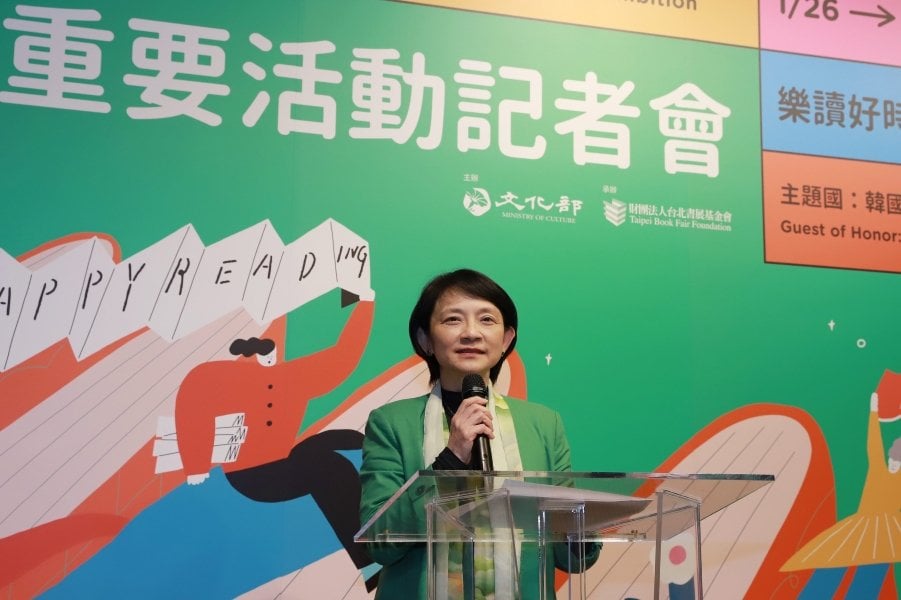 The highly anticipated 2021 Taipei International Book Exhibition (TiBE) will be held at the Taipei World Trade Center Hall 1 from Jan. 26th to 31st, having been canceled the previous year due to the pandemic and is expected to be one of the few physical book exhibitions in early 2021.

With the biggest publishing event of the year right around the corner, the vice president of Taiwan Creative Content Agency (TAICCA), Alice CHANG, attended the press conference held by the Taipei Book Fair Foundation (TBFF) on Jan. 12th to announce the theme of TAICCA’s pavilion, “Beyond Books: Stories Ahead.” She added that this year’s pavilion will highlight international copyright licensing as part of TAICCA’s mission to boost Taiwan’s publishing industry.

TAICCA vice president Alice CHANG introduces the TAICCA Pavilion and the activities for the TiBE.（Photo by the Ministry of Culture）

Due to the pandemic, many major book exhibitions worldwide have either postponed or transitioned online. CHANG emphasized TAICCA’s continuous effort to export Taiwan’s outstanding works by coordinating with major book exhibitions and the Books From Taiwan (BFT) initiative to organize online copyrights promotional conferences to bring Taiwan’s original stories into the international spotlight.

The copyrights promotional conference at the TiBE hosted by TAICCA has invited book scouts and international licensing agencies from 14 countries including Indonesia, Thailand, Vietnam, Korea, Japan, Canada, Germany, France, Italy, the UK, the USA, Holland, Australia, and Ukraine, as well as previous participants of the Taipei Rights Workshop.

Besides international copyright licensing, the TAICCA pavilion is designed into three color-coded sections to represent TAICCA (red), Books from Taiwan (yellow), and Taiwan Comic Base (turquoise). The main poster also incorporated the characteristics of comics, novels, and speech bubbles to represent the three functions of the three pavilion sections, including Comics, Copyright Licensing, and Conference Stage zones.

The Copyright Licensing Zone illustrates the promotional process of translated Taiwanese publication will introduce the achievements of the BFT initiative, which has successfully promoted copyrights in 24 languages. So far, out of the 342 books selected, it has sold 165 and reached a total of 319 transactions. The display will visualize the BFT initiative, copyright licensing information, translated books display, and licensing Q&As. It also features “Copyright Trivia,” offering strategies and examples of copyright licensing as well as demonstrating the different translated titles and covers of the same IP, showcasing the vibrant scene of translated Taiwanese literature.

The publishing industry is considered to be the birthplace for fascinating stories and IPs that can transform into a multitude of content. To further reinforce the method of One-Source Multi-Use (OSMU) and promotes cross-medium IP adaptation, TAICCA sets up a cross-medium themed exhibition, “The Voice of Comics,” in the Comics Zones to feature audio-books of popular mangas from the Creative Comic Collection (CCC) such as Yan (閻鐵花), Tan-Tsiu-Niu (守娘), and The Funeral Concerto (tentative) (送葬協奏曲). The exhibition invited well-known voice actors and an award-winning music producer to reimagine the possibilities of audiovisual and ACG content with an interactive experience.

In 2020, the global audiobook market has an estimated value of 3.5 billion USD with more than 1 billion listenership, indicating an endless market potential of “story listening.” To further explore this trend, TAICCA will host a series of ten “The Sound of Content Salons'' at the Conference Stage Zone of the pavilion, inviting experts in intellectual property law, audiobook, and sound content market to expand the imaginations of book-to-audio interpretation and IP adaptation.

Additionally, TAICCA will host a conference on Jan. 28th at 11 am with the topic “The Stories Ahead - Best Practices of Publishing IP Adaptation.” The discussion, moderated by TAICCA’s Content Lab Director Leo LI, will surround content development and translation to explore the various market potentials for maximizing the value of a publishing IP.